Link to this page

Melancholy I
Order a Hand-Painted Reproduction of this Painting 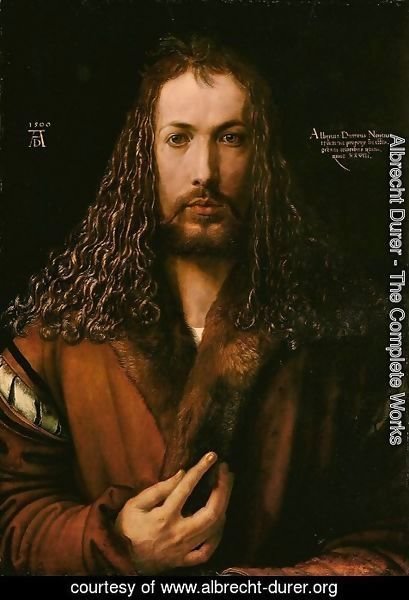 Albrecht Durer was born in Nuremberg. His family came from Hungary, germanizing the family name of Thürer when they settled in Nuremberg soon after the middle of the 15th century. His father, also called Albrecht, was a goldsmith and served as assistant to Hieronymus Helfer, and in 1468 married his daughter Barbara. They had eighteen children, of whom Albrecht was the second. Albrecht's brother, Hans Durer, became a famous artist as well.

At the age of fifteen Durer was apprenticed to the principal painter of the town, Michael Wolgemut, a prolific if undistinguished producer of small works in the late Gothic style. Durer learned not only painting but also wood carving and elementary copper engraving under Wolgemut. At the end of his apprenticeship in 1490 he travelled (Wanderjahre). In 1492 he arrived in Colmar, intending to study under Martin Schöngauer, a well regarded painter-engraver of his time. He found that Schongauer had died the previous year, but he was received kindly by the family of the deceased master there and in Basel. Under them he evidently had some practice both in metal-engraving and in furnishing designs for the woodcutter. He left Basel some time in 1494 and travelled briefly in the Low Countries before he returned to Nuremberg. From this period, little of the work that can be attributed to him with certainty survives. 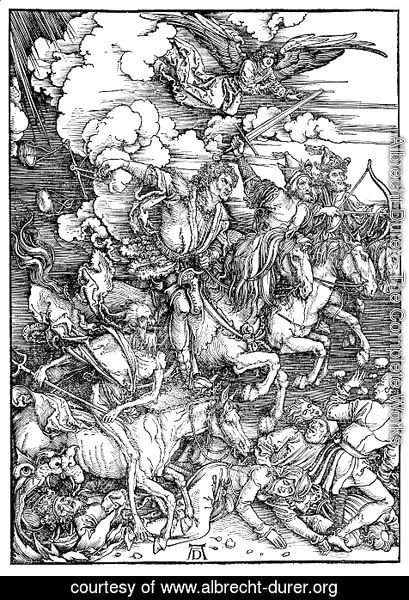 DURER'S FIRST YEARS AS AN ARTIST

On July 9, 1494 Durer was married, according to an arrangement made during his absence, to Agnes Frey, the daughter of a local merchant. His relationship with his wife is unclear and her reputation has suffered from a posthumous assault by Durer's friends. He did not remain in Nuremberg long; in the autumn of 1494 he travelled to Italy, leaving his wife at Nuremberg. He went to Venice, evidence of his travels being derived from drawings and engravings that are closely linked to existing northern Italian works by Mantegna, Antonio Pollaiuolo, Lorenzo di Credi and others. Some time in 1495 Durer must have returned to Nuremberg, where he seems to have lived and worked for possibly the next ten years, producing most of his notable prints.

During the first few years from 1495 he worked in the established Germanic and northern forms but was open to the influences of the Renaissance. His best works in this period were for wood-block printing, typical scenes of popular devotion developed into his famous series of sixteen great designs for the Apocalypse, first carved in 1498. Counterpointed with the first seven of scenes of the Great Passion in the same year, and a little later a series of eleven on the Holy Family and of saints. Around 1504-1505 he carved the first seventeen of a set illustrating the life of the Virgin. Neither these nor the Great Passion were published till several years later.

In the more finely detailed and expensive copper-engraving Durer was training himself. He attempted no subjects of the scale of his woodcuts, but produced a number of Madonnas, single figures from scripture or of the saints, some nude mythologies, and groups, sometimes satirical, of ordinary people. The Venetian artist Jacopo de Barbari, whom Durer had met in Venice, came to Nuremberg for a while in 1500. He influenced Durer with the new developments in perspective, anatomy and proportion, from which Durer began his own studies. A series of extant drawings show Durer's experiments in human proportion, up to the famous engraving of Adam and Eve (1504) which showed his firm and detailed grasp of landscape had extended into the quality of flesh surfaces by the subtlest use of the graving-tool known to him. Two or three other technical masterpieces were produced up to 1505, when he made a second visit to Italy. 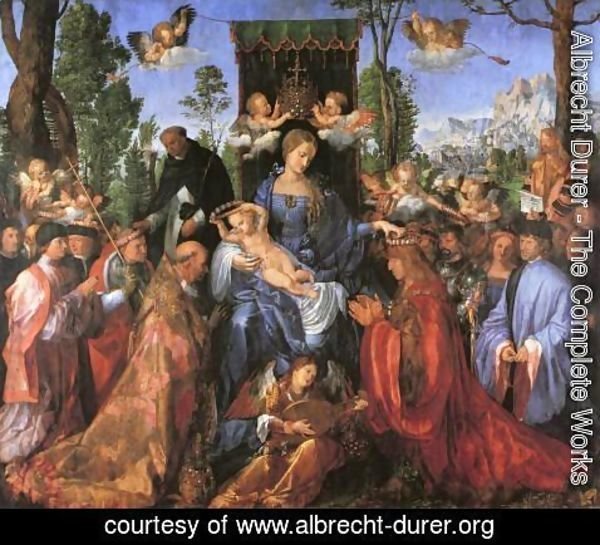 In Italy he turned his hand to painting, at first producing a series of works by tempera-painting on linen, including portraits and altarpieces, notably the Paumgartner altarpiece and the Adoration of the Magi. In early 1506 he returned to Venice, and stayed there until the spring of 1507. The occasion of this journey has been erroneously stated by Vasari. Durer's engravings had by this time attained great popularity and had begun to be copied. In Venice he was given a valuable commission from the emigrant German community for the church of St. Bartholomew. The picture painted by Durer was closer to the Italian style - the Adoration of the Virgin, also known as the Feast of Rose Garlands; it was subsequently acquired by the Emperor Rudolf II and taken to Prague. Other paintings Durer produced in Venice include The Virgin and Child with the Goldfinch, a Christ disputing with the Doctors (apparently produced in a mere five days) and a number of smaller works.

Despite the regard in which he was held by the Venetians, Durer was back in Nuremberg by mid-1507. He remained in Germany until 1520. His reputation spread all over Europe. He was on terms of friendship or friendly communication with all the masters of the age, and Raphael held himself honored in exchanging drawings with Durer. 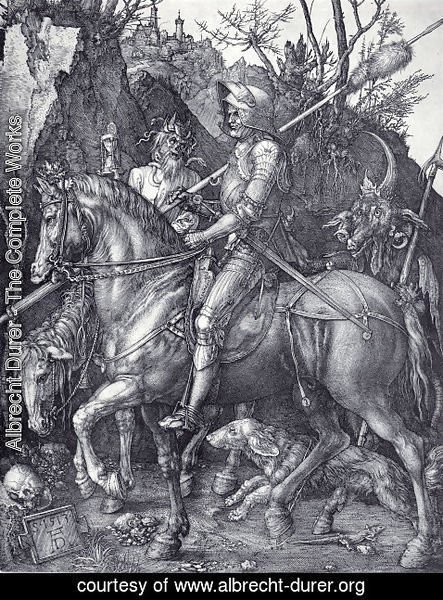 The years between his return from Venice and his journey to the Netherlands are commonly divided according to the type of work with which he was principally occupied. The first five years, 1507-1511, are pre-eminently the painting years of his life. In them, working with a vast number of preliminary drawings and studies, he produced what have been accounted his four best works in painting - Adam and Eve (1507), Virgin with the Iris (1508), the altarpiece the Assumption of the Virgin (1509), and the Adoration of the Trinity by all the Saints (1511). During this period he also completed the two woodcut series of the Great Passion and the Life of the Virgin, both published in 1511 together with a second edition of the Apocalypse series.

From 1511 to 1514, Durer concentrated on engraving, both on wood and copper, but especially the latter. The major work he produced in this period was the thirty-seven subjects of the Little Passion on wood, published first in 1511, and a set of fifteen small copper-engravings on the same theme in 1512. In 1513 and 1514 appeared the three most famous of Durer's works in copper-engraving, The Knight and Death (or simply The Knight, as he called it, 1513), Melancolia and St Jerome in his Study (both 1514).

In the remaining years to 1520 he produced a wide range of works. Tempera on linen portraits in 1516. Engravings on many subjects, experiments in etching on plates of iron and zinc. A part of the Triumphal Gate and the Triumphal March for the Emperor Maximilian. He also did the marginal decorations for the Emperor's prayer-book and a portrait-drawing of the Emperor shortly before his death in 1519. 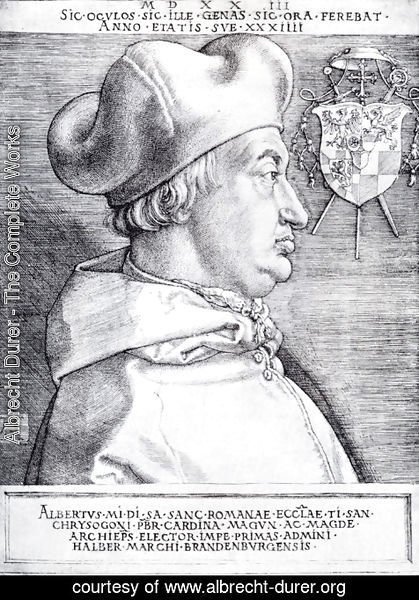 In the summer of 1520 the desire of Durer to secure new patronage following the death of Maximilian and an outbreak of sickness in Nuremberg, gave occasion to his fourth and last journey. Together with his wife and her maid he set out in July for the Netherlands in order to be present at the coronation of the new Emperor Charles V. He journeyed by the Rhine, Cologne, and then to Antwerp, where he was well received and produced numerous drawings in silver-point, chalk or charcoal. Besides going to Aachen for the coronation, he made excursions to Cologne, Nijmwegen, 's-Hertogenbosch, Brussels, Bruges, Ghent and to Zealand. He finally returned home in July 1521, having caught an undetermined illness which afflicted him for the rest of his life.

Back in Nuremberg he began work on a series of religious pictures. Many preliminary sketches and studies survive, but no paintings on the grand scale were ever carried out. This was due in part to his declining health, but more because of the time he gave to the preparation of his theoretical works on geometry and perspective, proportion and fortification. Though having little natural gift for writing, he worked hard to produce his works. The consequence was that in the last years of his life he produced, as an artist, comparatively little. In painting there was a portrait of Hieronymus Holtzschuher, a Madonna and Child (1526) and two panels showing St. John with St. Peter in front and St. Paul with St. Mark in the background. In copper-engraving Durer's produced only a number of portraits, those of the cardinal-elector of Mainz (The Great Cardinal), Frederick the Wise, elector of Saxony, and his friends the humanist scholar Willibald Pirckheimer, Melanchthon and Erasmus.

Of his books, he succeeded in getting two finished and produced during his lifetime. One on geometry and perspective, which was published at Nuremberg in 1525, and one on fortification, published in 1527. His work on human proportions was brought out shortly after his death in 1528. (from ART in the PICTURE .com)

Report an error on this page